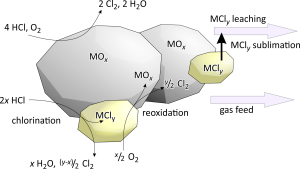 Most relevant chemicals, materials and pharmaceutical products require the application of catalysis in at least one step of their fabrication. Catalysis is a key technology in an environmentally friendly, energy-efficient industry as it enables chemical reactions to take place at lower temperatures through high activity, prevents the formation of harmful waste through high selectivity and is sustainable through high stability of the catalyst material. A good catalyst has all three of these fundamental characteristics.

Catalysts degrade over time, which means that they lose catalytic activity or selectivity due to a variety of aging processes. Catalyst aging is an important issue in heterogeneous catalysis and electrocatalysis, where a catalyst material is used over a prolonged time in a stationary or mobile application, such as a chemical reactor or an energy conversion device. Due to catalyst aging, the material needs to be replaced when the catalyst activity and/or selectivity drop below a given target level, typically after time spans of several months or years. While catalyst deactivation is ultimately inevitable, reducing the effects of degradation yields more stable catalysts with extended profitable operation time. One prominent degradation mechanism is surface segregation, which has been connected to the deactivation of mixed oxide catalysts, such as perovskite or spinel oxides and CeO2-based mixed oxides. The surface composition of such complex nonstoichiometric compounds, which are often employed as active materials in catalysis and electrocatalysis, plays a crucial role in the catalytic activity. Tailoring the surface properties to prevent deactivation of mixed oxide heterogeneous and electrocatalysts require a detailed understanding of the mechanism and driving forces of surface segregation.

Since in situ or operando experimental methods only enable observation over short time periods, they are of limited use in the study of catalyst aging. Post mortem characterization, however, gives little insight into the causes and mechanisms of degradation. From a theoretical standpoint, one of the major challenges in studying catalyst degradation is the fact that driving forces for degradation are usually not immediately evident on the atomistic level because they are a direct result of the interaction of the catalyst material with the reaction medium in the non-equilibrium situation of a chemical reactor or energy conversion device. These limitations can be overcome by a multi-scale theoretical modeling approach that simulates interaction of the material with the gas phase under reaction conditions and the effect of degradation (i.e., the long-term evolution of surface and bulk) on the catalytic activity (i.e., processes on short time scales). However, first-principles-based multiscale models for these applications are scarce and far from application levels; they are necessary, though, to understand the interaction of complex oxide materials with the gas phase under the nonequilibrium conditions of a catalytic reactor or device.

I propose to employ multiscale modeling approaches to study degradation phenomena during the nonequilibrium evolution of bulk and surface chemistry of solid heterogeneous catalysts and electrocatalysts under operating conditions. Such an approach not only bridges time and length scales, but also paves the road from fundamental insight on the level of model system to the level of devices, enabling knowledge-driven optimization and screening.