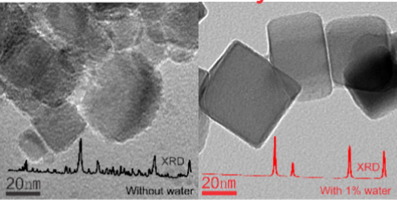 Mixed Ce1-xZrxO2 nano-rod particles with varying Zr doping levels of up to 20% were exposed to Deacon reaction mixtures with high HCl concentration at a reaction temperature of 430 °C. The mixed Ce1-xZrxO2 nano-rod samples were characterized before and after Deacon reaction by x-ray diffraction (XRD), transmission electron microscopy (TEM), and x-ray photoelectron spectroscopy (XPS). Pure CeO2 nano-rods are shown to suffer from bulk-chlorination of the catalyst (CeCl3x6H2O) for reaction mixtures HCl:O2 > 2 that is accompanied by dramatic activity losses. For a reaction mixture of HCl:O2 = 2.5:1, already 5% Zr doping suffices to stabilize the structure Ce1-xZrxO2 nano-rods against bulk chlorination. Although ZrCl4 is volatile above 330 °C, we do not encounter discharge of Zr from the fixed bed flow reactor as long as severe bulk chlorination of the Ce1-xZrxO2 catalysts in the form of CeCl3 is not observed in XRD. With a simple quasi steady-state model we can corroborate the stabilizing effect of Zr assuming that ZrCl4 evaporation is limited by diffusion of Zr4+ in the ceria-zirconia subsurface. As qunatified with XPS the chlorine concentration of stable and active Ce1-xZrxO2 nano-rods with 5% Zr is too high to be solely ascribed to on-surface chlorine. The incorporation of Cl into the surface-near region is further supported by XPS experiments performed after oxygen plasma treatment. For even more harsh reaction conditions HCl:O2 = 3:1 none of the Ce1-xZrxO2 nano-rods was stable at 430 °C. However, an increase of the reaction temperature to 500 °C enables even pure CeO2 nano-rods to be stable under such harsh reaction conditions.